Hi, comrades! Welcome to the second issue of Zemeroth's devlog.

It slowly grows into a middle-sized project: Zemeroth has 4.3k LoCs and 82🌟 now. Though I still can't find enough free time to work on it on daily basis and I have to take weeks-long breaks sometimes.

So, the progress is quite slow 🐌 but still, I've managed to do some amount of useful stuff during last three months. Here's a short video of how the game looks right now:

Ok, let's talk about what exactly have I done for the project during this autumn.

The most important change for anyone who wants to try out Zemeroth and don't want to compile it from the source is auto-deployed pre-built binaries.

They are compiled and deployed to Github's releases by CI servers (Travis, Appveyor and CircleCI) on every tag.

The latest release at the time of writing is v0.0.3: 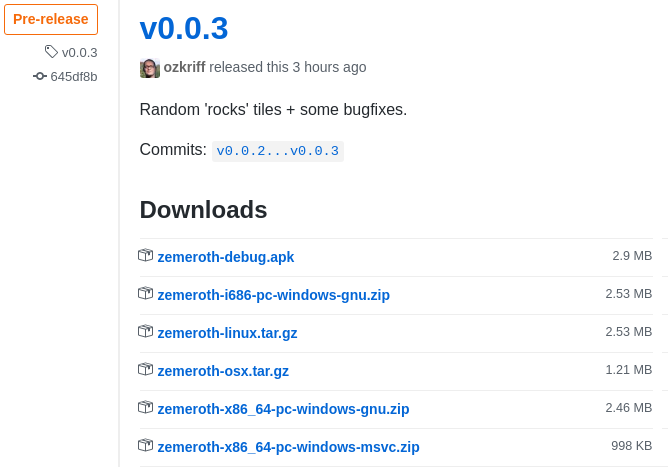 Linux/Windows and OSX versions are not that interesting - they are built exactly like it was done for ZoC.

I've stolen basic apk-building script for CircleCI from @tomaka (thanks again!) - https://github.com/tomaka/glutin/pull/919 - and it worked straight out of the box.

Deploying apks is harder: circle-ci doesn't provide a built-in convenient way of deploying to Github, so you have to wield some curl/github_api magic.

All the magic is packed in .circleci/upload_apk_to_github_releases.sh script (which is based on this gist).

Also, some strange branch magic is required if you don't want to run both build and deploy targets on every commit.

Btw, old badges were not that clear of what do they mean:

Most programmers know that travis's badge usually means Linux/OSX builds and appveyor is for Windows builds. But what does the third one?

To fix this I've added custom labels to the badges through shields.io:

The Grass is just a randomly-placed decoration, but Blood Pools are also an additional indicator of a successful attack:

To make Zemeroth a little bit more tactical Jokers were added. They can be used either as Attacks or Moves.

In the previous version, units were dying from a single hit. That doesn't work well with reaction attacks as they were dying too quickly: fighters should have some kind of basic hit points.

So Strength was added.

This name is stolen from Banner Saga: as I'm going to use this property also as a basic attack modifier. Right now every successful attack deals a damage of one strength but later a much more fine-grained battle math will be implemented.

To show the most important dynamic information about units on the map "Dots" were added.

The current legend is:

@LPGhatguy pointed me out on twitter to a problem with colors:

With the amount of red/green in the game so far, you should try it with a Deuteranopia filter!

I've googled a simulator: etre.com/tools/colourblindsimulator. Here's an example of its output: 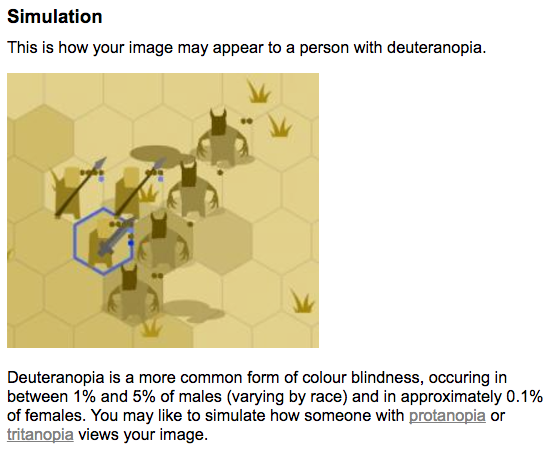 And, yeah, that doesn't look readable at all. It's clear that I should change the colors and shapes in the near future.

Btw, http://gameaccessibilityguidelines.com is a very interesting resource. I've never thought about a lot of issues raised and explained there.

Dots can show only a small portion of the dynamic information about units. Other less important dynamic or static information goes into the side panel. 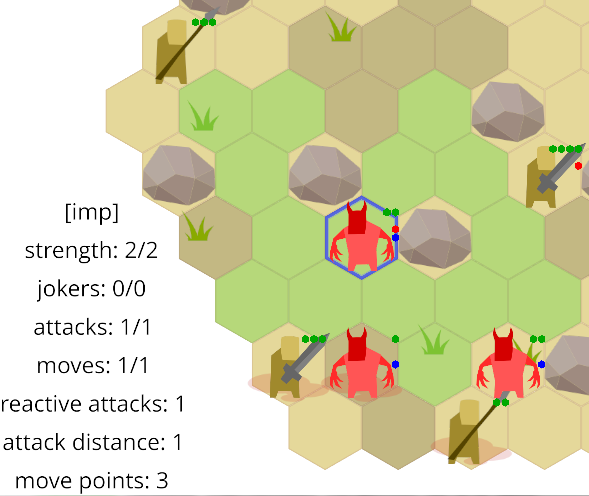 Btw, now you can select enemy units to see their move range and stats in the info panel.

NOTE: additionally, a deselection of any unit on the second click was added. 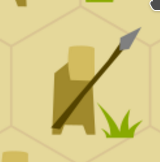 Another important gameplay change is an addition of third fighter type: "Spearman".

He has an attack radius of two tiles and can control with reaction attacks a big area of 18 tiles around him. 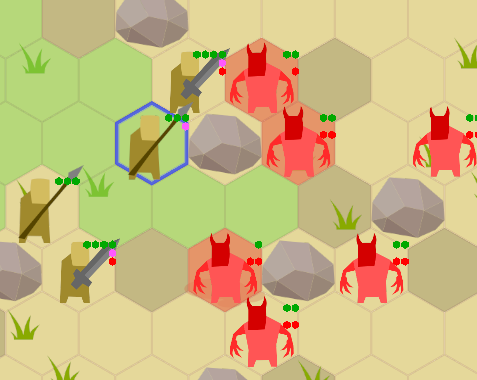 On the picture above the spearman has only one Joker point: this is not an attack unit, he's almost useless during his own turn.

But if spearman hasn't used its Joker during his own turn, he has four reaction attacks during enemy's turn: 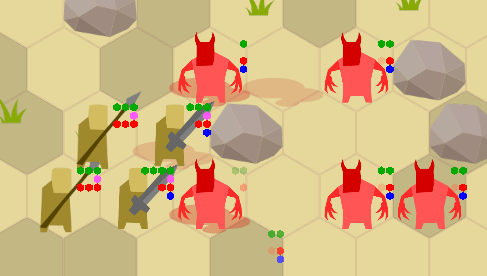 And that's a lot considering that reaction attacks can interrupt enemy's movement.

Also, this unit has only three Strength points to accent his defence role.

Previously, Zemeroth's units were represented by a single struct holding all the stuff as its fields. Not a very adaptable solutions and it was impossible to create a non-unit type of objects.

It's the end of 2017 so the solution to this problem is obviously components.

With a component system, I should be able to implement: Boulders, Bombs, Fire, Poison stuff, Corpses, etc.

I don't think Zemeroth needs a full-featured ECS solution (like specs) as the game is turn-based. A bunch of HashMap<ObjId, ComponentType> will do the work fine.

Meet Rancör - a simple macro-based component system. I'm not calling this an ECS because it has no systems, it's just a storage.

Nothing fancy, you just declare some usual structs for components and create a hidden HashMap-based monster-struct using a friendly macro:

And then use individual fields:

Or call parts.remove(id); to completely wipe-out the entity.

Rancor seems to work fine, but I see two issues:

As I do not expect anyone to use it, this carte lives in the Zemeroth's repo.

Rust community kinda loves TOML, but I'm not a fan of this format. TOML is not that bad, but I find its tables too strange for anything but simple configs.

And I've decided to try to use RON format for Zemeroth.

Thanks to @kvark for starting this project originally and thanks to @torkleyy for resurrecting the project for Amethyst's needs.

To make tactics a little bit more interesting and to prototype non-agent objects using Rancör I've added some tile-blocking Boulders. This is a first non-agent object type in the game.

It's a little bit strange that I have different terrain types support for a long time, but not actually using them in the game at all. Meet randomly-placed tiles of TileType::Rocks type. You can move through these tiles, but it requires 3 move points and not 1. 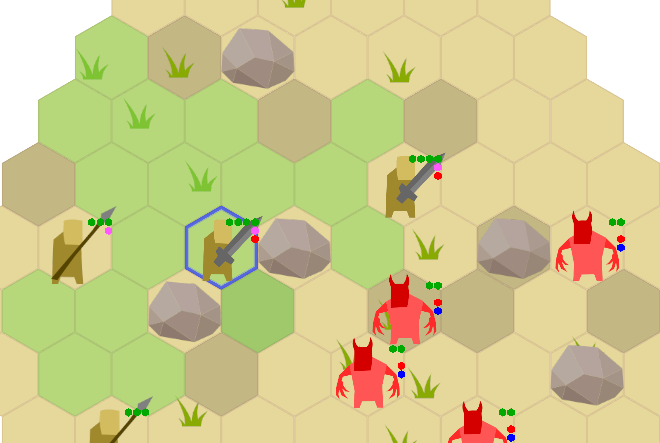 Rock tiles and boulders work together with blood and grass to make the battlefield look a little bit less boring.

(Yes, I know that it'll be better to use a different texture for Rocks tiles, not just a darker color)

I'm tired of adding a special-cased printlns to debug something small and removing them before the commit.

As I don't have much experience with slog, I decided to replace printlns with a classic env_logger. It seems to work, for now, the source code is filled with all kinds of info! and debug! calls. :)

Some news about my silly game engine.

It's important to decouple Häte from Zemeroth. First, Häte was extracted to a separate crate inside the repo. The next step is to separate example/test screens.

These screens do nothing game-specific so they belong to the engine.

There was a bunch of tasks needed to be solved before extracting the examples:

ZoC was almost unusable in debug builds: it may take more than 10 seconds to start a game on some machines and now I'm trying to keep Zemeroth's debug builds fast enough.

One of the common problems is that Rusttype is very slow in debug builds, especially on Android. As a text in Häte is rendered by creating a separate texture for every string the simplest solution was to cache these textures.

Caching is a little bit sloppy solution, but we have no other choice until https://github.com/rust-lang/cargo/issues/1359 is implemented.

NOTE: Btw, there's a cool hack from @matklad, but you have to compile an outdated cargo from his dev-branch. 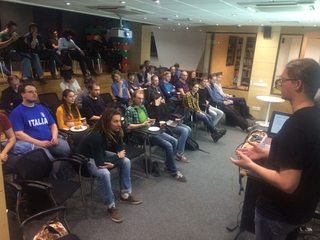 There was a local meetup in Saint-Petersburg this September where

Everything is in Russian, but here are the links anyway, just in case: 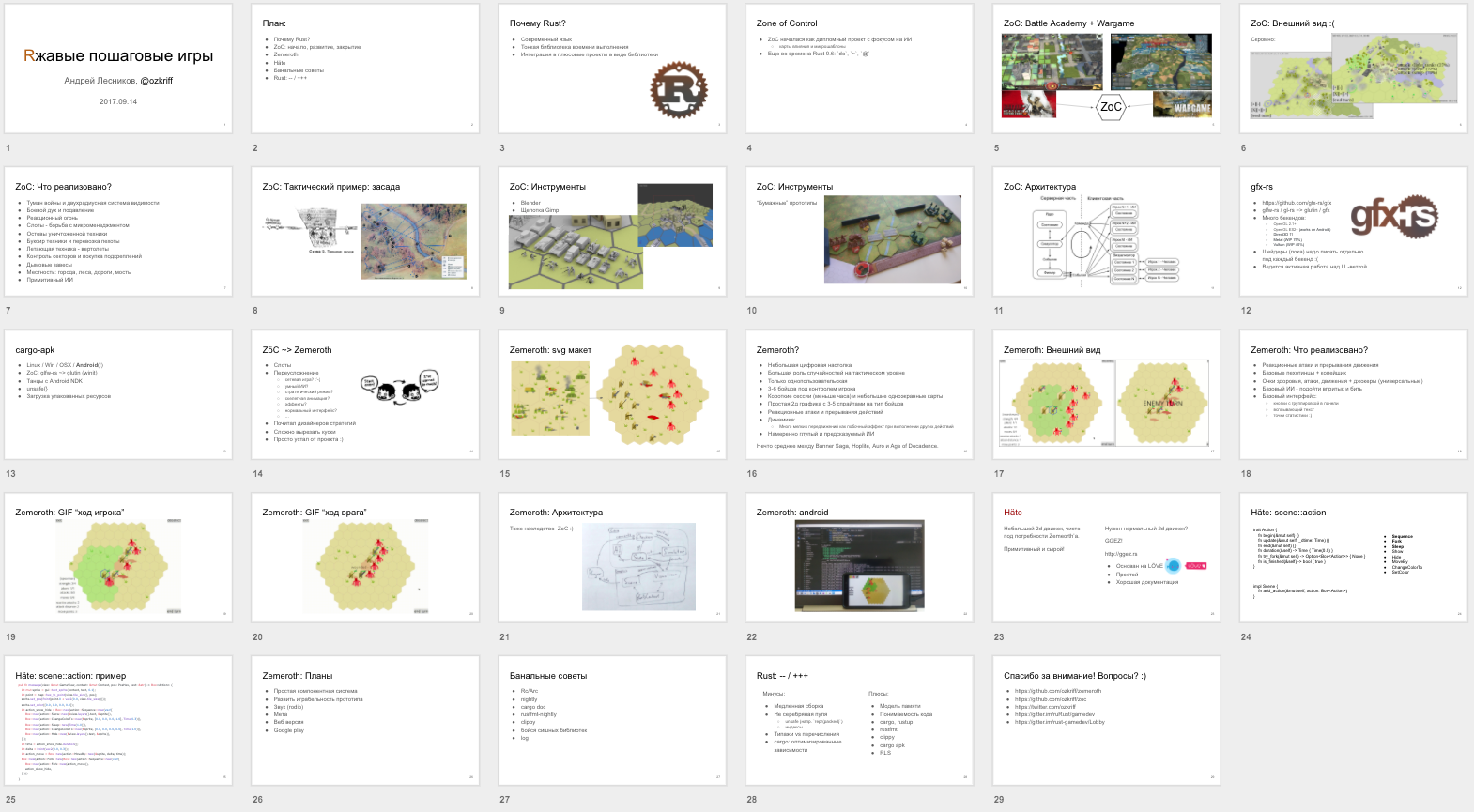 Thanks to JetBrains for hosting the event!

For a long time, I was trying to avoid the use of MD.

Mostly because MD has no built-in support for extensions and is MD is forever tied to HTML.

I was mostly hoping for RST to become popular enough. There was a chance, but doc team decided to stay with MD and now Rust community doesn't care about RST at all. :(

CommonMark solves the standardization problem to some degree. Though, it's still glued to HTML and is not easily extensible.

Anyway, I'm not going to use these documents anywhere except in the web browser, so... I'm going to migrate this blog to some rust blog generator from Pelican. This post is written in MD already.

A skirmish game is unimaginable without special abilities and some interesting instant and lasting effects of the actions.

So, here are some previews of what I'm working right now:

Whew! That was the longest piece of text in English that I've ever written O.o.